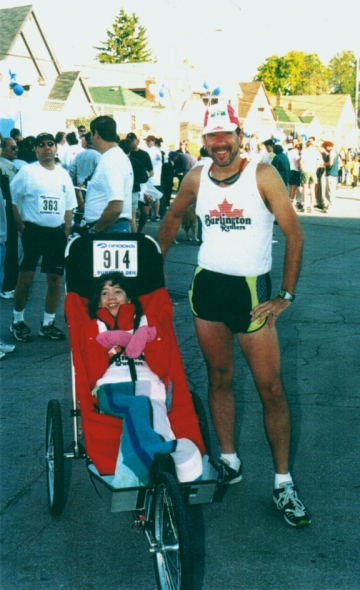 
It’s often said that it takes a whole village to raise a child. Sometimes it takes a small town to raise some kids and sometimes that larger village isn’t enough. However, when the right group of people gets together, miracles can happen.

Now, many people wouldn’t think that having the responsibility for looking after a severely handicapped child would be a blessing, but in some ways it has been. With challenges in life there sometimes comes opportunities for revealing the best within you and in those around you.

Let me share a little bit of Amanda’s history with you. Originally Amanda was one of a set of twins. As expectant parents we were overjoyed with the prospect of having two babies to bring into the world. However, as Rosemary’s pregnancy progressed, it became obvious that one of the pair was having problems. At four months, we had lost one of the siblings invitero. Then it became obvious that the second child was going to have problems as well. By the eighth month, the doctor’s were telling us that what started out as joy would probably end poorly. All the tests and measurements the physicians took pointed at serious health issues for the child within.

At the end of eight months, Rosemary was scheduled into the hospital and we were told that the remaining child she was carrying would probably not survive the birthing process and to be prepared for the worst. Let me tell you, there is nothing worse than heading into the maternity unit anticipating a funeral while those parents around us expect to bring home a child. We were given very little possibility of hope at the end of the birthing process. There were problems and Rosemary was in trouble herself.

But in the end, Amanda was born. And obviously, she didn’t die. First they said, that she would survive a matter of hours, then a day or two at most. At the end of the week, the doctors said they didn’t know how long she would live, but she wasn’t going to leave us any time soon.

In spite of the odds, Amanda has proven all the doctors wrong. She was a fighter with a capital “F”. Amanda was diagnosed as microcephalic, or small brained. Basically her brain didn’t develop the way it should have and this in turn affected her muscle control (cerebral palsy) as well as the speech and cognitive centers. The right side of her brain developed less than the left side so she is weaker in her left side than she is in her right. This also affected the areas that control vision, so sight in her left eye is severely affected. All in all, pretty devastating.

However, there is a bright side. Amanda is basically healthy, she has not had the seizures that other children similarly diagnosed are usually affected with. She is developmentally challenged but doesn’t seem to know that she is handicapped, so she is rarely frustrated. Amanda is aware of those around her, loves music and the company of people. She especially likes going for a run.

Over the years, we’ve been in and out of hospital. The first time was to have muscles and tendons released. The second hospital stay was to have her left hip socket worked on, the leg broken, then straightened and more releases done. The next time was an emergency visit to repair a serious stomach ulcer, where a third of her stomach was removed. The fourth time was for rods to be inserted either side of her spine to help straighten her back that was curving due to the weakness of her left side. You could say we had become one of the regulars on Ward 3c at the McMaster Medical Centre.

In early February 2002, Amanda dislocated her right hip, due to deterioration of the joint and tension from the tightening muscles and tendons. After visits to various doctors and specialists, multiple X-rays and a C.T. scan, she was booked for surgery to correct the problem that was causing her so much discomfort (and everyone else so little sleep). Her operation on May 28, 2002 was successful but the hip was so badly damaged that the top of the femur was removed. Hopefully, it will be a long time before she has to make another extended visit to the hospital.

Over the years, we’ve endured endless nights trying to console a child that cannot communicate or tell us what is bothering her or understand the reason for the invasive surgery that has been required to help manage her and address the progress of her condition.

This time has been the roughest stretch for our family in Amanda’s almost 17 years. Lack of sleep, limited resources and the elimination of support services that we have depended on, have all contributed to our challenges this year.

And then, just when we least expected it, a group of angels in BRC clothing appeared at our door with well wishes, empathy and more importantly food and help when we really needed it.

Rosemary and I would like to personally thank each and everyone that has touched us during this last month. Your concern has overwhelmed both Rosemary and myself, both because it was so unexpected and so greatly appreciated.

Once again, the Burlington Runners Club has proven itself more than just a bunch of people that like to run. The BRC is a community that cares and thoughtlessly gives of themselves when a need arises. I don’t believe that I can tell everyone how much their support has meant.

And if I haven’t said it enough already, we truly thank you all.