The awarding of the Guinness
Tom (right) finishes ahead of me (left) and by tradition, I award him his well earned prize.
2008 Bellwood Sprint Triathlon

That’s a very good question, “Why a Wedgie?” When I first heard that phrase, it triggered the memory of a famous Marx Brothers routine from their movie “The Coconuts“. The key phrase for the whole routine was “Why a duck?”

It’s a classic case of misunderstanding and random phrases confused and twisted. Groucho and Chico are talking about a map, when Groucho mentions about the presence of a “viaduct” between the mainland and the peninsula. Chico, in broken english, immediately replies, “Why a duck?”. Much hilarity, silliness, unusual connections and confusion ensues. Hey, it’s a Marx Brothers movie, that’s what happens.

What does all this have to do with a fancy carbon fibre water bottle cage and tool box? Patience, I’m getting to it. Just like Tom, the guy that makes the Wedgie and enjoys telling “10 mile stories” on our long runs, there’s a whole tale in it that needs time to tell properly.

Sometimes stuff just happens, it’s called synchronicity. Random, unrelated things bump into one another. Or as Groucho might have said, “Say secret word and duck will come down and bite you in the nose.” It’s like that with me. “Why a Wedgie” and “Why a duck” all makes sense in a strange, play-on-words connection, kind of way.

My introduction to Tom, the inventor of the Wedgie, was like that. If it wasn’t for an article in the local newspaper, we’d never have met. The Burlington Runners purchased a running chair so I could run with my daughter Amanda and published a story about it. Tom read that article and figured if he was going to join a running club, one that would buy a racer for a handicapped young lady was one he should join.

You see, Tom is a better swimmer and a better cyclist than I am, but I’ve got the edge when it comes to the run. Any time we race together, it’s always a toss up as to who is going to finish first. So for every race we do, beer is on the line. There is always enough Guinness for all competitors in our circle of triathletes, but between Tom and me, it’s the loser that gets the honor of serving the winner.

We have both competed in Ironman events and when preparing for them, you spend a lot of hours training. You swim five to ten kilometers a week, you do weekly century training rides and you run for hours. There’s lots of time to ponder the mysteries of the universe, your training program and how to finish ahead of your competition. In Tom’s case, specifically, that means crossing the line ahead of me. Train harder, train smarter, and get a faster bike, or in the case of the Wedgie, figure out how to make your bike a little more aerodynamic.

It was on one of those long training rides that Tom came up with the idea for the Wedgie. I like to think that he invented it while riding over a viaduct, but that would just be me straining for that thread of synchronicity. Instead, because of a long chain of random connections, I’ll just claim to be reason he had to create it.

On race day, I really don’t care who finishes ahead of who. What I do know is that when Tom and I race together, I push just a little harder. “Ducking” out, isn’t an option, I have to earn the right to be served that finish line victory beer.

I know why I race. It’s all about good friends, the spirit of competition and striving to find the limits of your abilities. So, to answer the question, that’s “Why a Wedgie.” 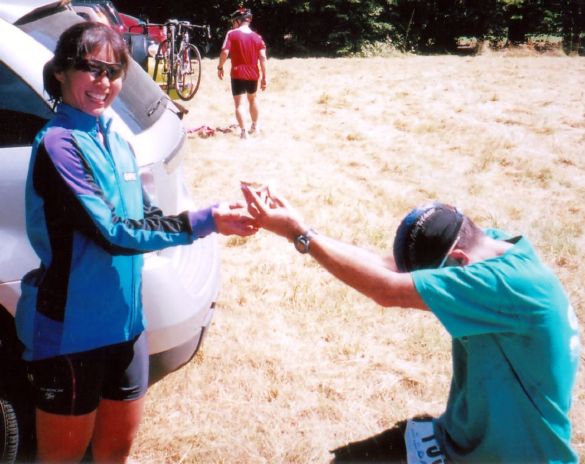 The Awarding of the Butter Tart
And to prove that even the ladies can kick my butt, I’m awarding training partner Tamoko a butter tart. She also finished faster than me at Bellwood. Tomoko doesn’t like beer, but she’d ride her bike 100 miles just to eat a butter tart.  Yes, I am assuming the “I’m not worthy” pose.