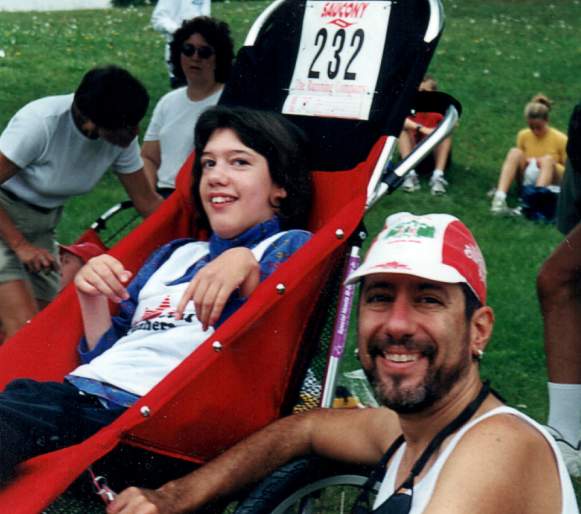 
I don’t need a Christmas present this year. Mine arrived in June via FedEx, courtesy of the Burlington Runners Club in Burlington, Ontario, Canada.

You may not have met my daughter Amanda. Amanda is special. She is mentally and physically handicapped, essentially non-verbal, stuck developmentally at about one and a half and confined to a wheel chair. We are lucky in that she has no serious health problems. She is alert, aware, she has a sense of humour and a smile to melt your heart. It does put limitations on what we can do together as a family but she does like to get out.

Back in June 2000, my wife Rosemary was away for the weekend at an Easter Seals sponsored retreat for mothers with handicapped kids. It’s affectionately called “Mom’s Camp” and it’s held at the Easter Seals summer camp that Amanda goes to for one week each year. The first year I had to literally kick her out of the house, but now she’s one of the first with her registration letter in the mail.

So, on that weekend Dad and kids get to “bachelor” it. That means dad cooks dinner Friday night but dinner out on Saturday and video at home after. Unfortunately, that also means that I was going to miss my runs on the weekend, unless I got creative. So, I told the youngest daughter, Lauren who was ten years old, that we were going to get up early on Saturday and get ready early to go out on the 8:30 AM club run. Lauren has been out many times, me on foot, her on bike, but I’ve never taken Amanda out. The logistics and my motivation have never been strong enough. This weekend I was motivated and I’d see if I could run with Amanda in her wheelchair for the five miler. It was pretty flat, but if she didn’t like it, or it was too cold, I could bail early and head back to the school to warm her up while I showered and changed.

Things go well, Amanda sleeps through the night, I don’t get paged from work and everyone gets their butts in gear at 7:00 AM. Bum changes, bathroom stops, breakfasts, clothes on, bike, helmets, jackets, changes of clothes and out the door in only one hour, twenty minutes. We make it into the parking lot just as everyone is assembling. Huff, huff, huff… I’m sweating and I haven’t even run a step yet. I pull the bike out of the van, Amanda and chair go bump out the back, I lock up just in time for the announcements.

We all stand around for the usual round of race announcements, congratulations on races run, the up coming beer run and welcomes for new faces. Oh, and a reminder to everyone present that I needed articles handed in yesterday for the newsletter. Some things never change.

The club treasurer, Ian Dunsmore, calls the group to order and heads us out on to the road. I have to adjust Lauren’s new bike helmet, fuss with Amanda’s jacket and hat before we can leave. Last ones out of the parking lot and at the back of the pack, we take off, sprint up the hill to catch the rest. I power up the hill and pass a couple of ladies and catch up to the back of the pack. Lauren peels past me, leaving me in her dust. She’s on a mission to catch the rabbits.

With every bump and jiggle, Amanda gets jostled. She’s having a howl, exploding with belly laughs every time I hit a bump. It becomes a game, chasing down the next runner, Dad says “Hello” and big smiles and waves from Amanda. It got to be an even better game when every time we went too fast, Amanda’s hat came off. We would stop, retrieve the hat and plunk it back on her head, then race ahead to catch the people we had just caught. We ended up traveling the whole five miles. The funny thing is that I think the club members got more enjoyment out of it than she did.

She didn’t have a fancy racing wheelchair and at fifty pounds she’s too big for a toddlers jog stroller, so I had to do it in her regulation issue wheelchair. My feet are too close, the handles are too low, the chair has too high a centre of gravity and wheelbase is too narrow. It was tough going, not because there were problems pushing her, but cornering and negotiating curbs at speed, were, ahem…, entertaining.

That week I had found a web site that sold special needs adapted joggers. I had been looking for about three years for something that would let Amanda join me, but not very hard. An article in the Human Race section of Runner’s World had a picture of just the thing I was looking for. I had been on the Internet to a few web sites and was in the process of finding out how much it was going to cost. I knew it was going to be expensive, but I was going to have to figure out how to pay for it. Running with Amanda was just too much fun not to do it again.

After the Saturday morning club run we all head to a local coffee shop to have a bite, something to drink, share race results and yak. Apparently there was a hasty executive meeting (sans the club newsletter editor) before the coffee klatch. I was told (not asked mind you, but TOLD) that the club was going to buy Amanda a jogger so that we all could share.

I was floored. I don’t think the club members at Williams Coffee Pub knew just how close I was to tears.

Later that week, a couple more phone calls, some measurements and a charge on my VISA later, I ordered bright a red Special Needs II from Baby Jogger for Amanda.

Three weeks later, the FedEx truck delivered a big cardboard box, shipped all the way from the state of Washington. A half-hour later, a skinned knuckle and a few moments consultation with the assembly instructions we had a five-foot long racing machine in my front room. Sitting there, all shiny aluminum, red seating material, black rubber and looking FAST, it was obvious that the new chair had to be nicknamed “The Rocket”.

Amanda and I did our first test drive up and down Waterdown Road ten minutes later. She wasn’t too sure about the new wheels or the seating arrangements, but it was different and it takes a while for her to become comfortable with new things.

Since that late June day, “Team Rocket” has joined in on as many Saturday morning runs as we could make it to and participated in three 5 km races this year. Amanda has her own club singlet, and when it comes out, she gets very excited because she knows we are going racing again.

During the winter months, Team Rocket will be waiting for the warmer weather, so we can once again share the roads, the waves and smiles. It’s Amanda’s way of saying, “Thank-you Burlington Runners“